By Montreal and Beyond January 6, 2012 Bangalore Ooty strike Swarista

Us, and a Jain temple in Ooty

It was no picnic getting here, but we’ve arrived in Bangalore (on the eve of Riccardo’s 35th birthday)! We can’t believe we’ve only been in India for 9 days. Our cozy little apartment in Montreal seems like worlds away.

Since our last update, good times were had in Ooty, a delightful hill station in the Nilgiri Hills. It was once the summer home of the Governor of Madras, and it’s still a lush, green area with colourful villages built into hillsides, a public rose garden (left over from the maharaja days), and plenty of tea plantations strewn about. There we enjoyed unbelievable vistas (mountains, forests, temples, plantations, and wildflowers of every colour and type), a slew of temples (Hindu or Jain – take your pick), and Ooty’s famous chocolates, honey, and tea. Virtually every business in town was on strike in connection with a political dispute with neighbouring Kerala over a dam (it’s kind of a big deal). This turned out to be convenient for us, as we were able to meander through the streets in relative peace and never had to line up for a glass of chai or a deep-fried banana pepper. One spot didn’t appear to have gotten the memo about the strike, so we went there for dinner – it was a Chinese restaurant, decorated how you’d imagine a Chinese restaurant would look in the 60s (lots of red, gold, dragons…. you get the idea). Indians are like the Jews of Asia – they can’t get enough Chinese food.

When we got back to our room it was freezing. I called the front desk to ask how to turn off the AC, and was told, “No AC in Ooty, Medem!” It really is that cold – when we walked back after dinner, it was 0 degrees Celsius. People in Ooty (Ootyans? Ootites?) wear woolly tuques, scarves and sweaters over their sarees and dhotis (but never abandon their beloved sandals). 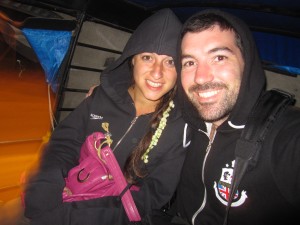 In the morning, we took a bus to the highest point in the Nilgiris where we were a curious attraction for tea planting families. One elderly gentleman excitedly gestured for Riccardo to take his photo, then flung his shabby scarf to the ground and posed solemnly.  This might be the most beautiful place we’ve seen so far, and certainly the best-smelling (thanks to mountain air tinged with tea leaves). 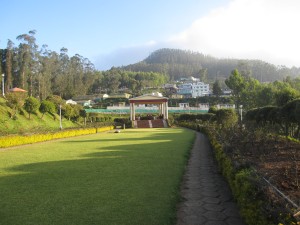 My dream snack: a deep fried banana pepper for Rs10 (about 30 cents)

Ooty’s famous chocolate, although we weren’t sure why

Up in the hills, with the aroma of tea hanging in the air

Ooty is reached by the Nilgiri Mountain Express, also known as the “toy train”. Look it up, it was declared a World Heritage Site by UNESCO. We took this train down the hill to Mettupalayam (3.5 hours, mainly spent pretending to be a maharaja heading home after a trip to survey the plantations), then spent 2 hours on a bus to Coimbatore (mainly spent holding our breath and avoiding eye contact with fellow passengers), and then a few chaotic hours in Coimbatore while we figured out the next move (getting to Bangalore). 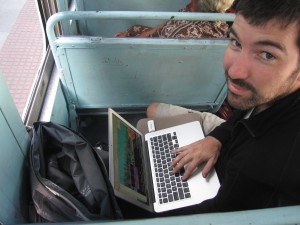 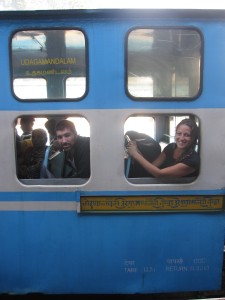 That was an ordeal in itself – we took an auto (short for autorickshaw) to the train station, which is a hellish place teeming with frazzled people of every (Indian) walk of life. After waiting in a queue (and I use the term loosely) for a good ten minutes, a kindly stranger advised us that we probably wouldn’t get seats on the train, but might be able to get an “unreserved ticket” at a private office across the street below a cell phone store (!). Feeling like Amazing Race contestants, we dashed off in search of the sketchy spot – when we found it, a tiny, skeletal guy behind a rickety counter wagged a bony finger at us and told us we were out of luck. A mouse scurried by behind him as he delivered the bad news, and I almost gagged. Just as we turned to each other to discuss plan B, yet another kindly stranger stepped up and offered to help us find a bus, even telling us where to go and sending us off in an auto. We were sure we were being hustled, but couldn’t figure out exactly how, so we just went with it. The two kindly strangers, as well as the auto driver, turned out to simply be decent people whose assistance ensured that we got on the bus to Bangalore that night, and on a comfortable Volvo, no less (a Volvo is like a palace on wheels compared to other busses in these parts).

During our wait for the bus, we made the acquaintance of Peter, a young restaurant owner who was greatly amused when we asked hopefully for a beer with our meals – “This is India,” he smirked, with the head wobble typical of young cool guys (yes, there are different styles of head wobbles). He took pity and was sweet enough to get us an auto to a nearby bar which he promised would be right up our alley. The place in question, the Blue Sea, was downstairs, extremely dark, and blasting both the AC and a TV playing an endless stream of commercials. I was the only other female patron (despite the obvious awesomeness of the place), and there may well have been cock-fighting taking place in the basement… but, at least we managed to get in a Kingfisher before the long bus ride.

The relatively painless (soothing, even) bus ride ended with a rude awakening at our destination – we were roused from a deep sleep by a guy hollering “BANG-GLORE, LAST STOP!” directly above us. We hurried off the bus and directly into a sea of auto drivers and travel agents each peddling their unique and amazing services. (I have to say that Riccardo has gotten pretty adept at fending off touts, as well as driving a hard bargain – facial hair, tattoos and relative height command a certain respect here.) We eventually made it to Bevan and Eliza’s palatial apartment in BTM Layout after resorting to our usual MO when looking for information: asking 5 different people on the street and cobbling together some sort of answer based on their (completely contradictory and mostly indecipherable) responses.

Today, our first day in Bangalore was totally relaxing, chiefly because we didn’t leave the apartment except for meals. For breakfast we had rava masala dosas at Swarista; for lunch, a Chinese-North Indian smorgasbord at Udupi Garden; and for dinner, a family-size mutton biriyani at a Hyderabadi restaurant. We were joined by Bevan’s awesome parents, Jim and Maureen, who also arrived earlier that morning, as well as by Conor, Eric, and Kashyap for parts of the day. After dinner, Bevan brought us to a tea stall for a glass of kashaya (sweet hot milk with ginger, pepper, and mint), on which I developed an immediate and powerful dependency. I’ve been able to think of little else since. Warm drinks are especially welcome as I’ve developed a slight throat tickle – related, I think, to the omnipresent air pollution. Aaaand that was enough of Bangalore for one day! 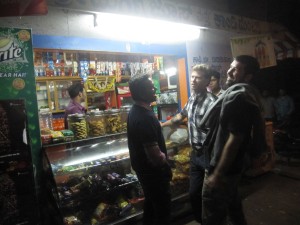 Down at the kashasa stand

One thought on “Snooty Ooty and Big Bad Bangalore”