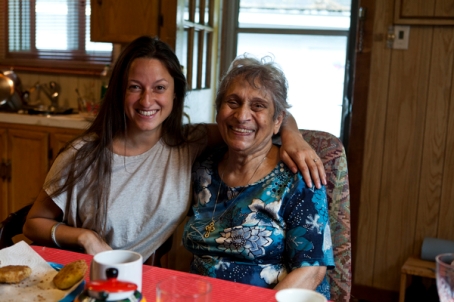 Doreen grew up with my Nana during the golden era of the British Raj, with shared origins in the south Indian province of Goa – their families have known each other since the 1850s. They spent their early years staging elaborate Gilbert & Sullivan productions, flirting, working on their tennis arms, and eating delicious food at fancy balls and beach pic-nics. Their friendship was lifelong, persisting as they earned their respective teaching degrees, got married, and immigrated to Canada in the 60s. An outfit knitted for me by Doreen was one of the first things I ever wore.

Given Doreen’s place of honour in our family’s history, I was rather excited when she offered to impart her secrets for preparing potato chops and pan rolls, two popular party snacks in the Goan pantheon, to some of my relatives and me. I can remember excitedly spying the enormous silver platters bearing these tasty morsels being brought out at cultural association picnics. I also remember fleetingly wondering how the delicious mince (ground beef) filling came to be enveloped in the delicate potato shield of the potato chops, and how each bite of a pan roll always seemed to contain the optimal ratio of savoury meat and delicate crepe.

Doreen can’t remember exactly who taught her to make potato chops and pan rolls, but she definitely didn’t learn back home in Karachi. There, of course, the menial task of food preparation was carried out by family cooks. Upon arriving in Canada, Doreen and her contemporaries discovered the impracticalities of hiring kitchen help here, and had no choice but to teach themselves how to recreate their favourite dishes. My grandmother, God bless her, never caught the cooking bug – she remained a fierce devotee to convenience foods (the fewer steps, the better) until the day she died. But Doreen was a natural, effortlessly serving everything from biriyani to complicated Goan desserts to her thankful husband and kids (between teaching grade two, earning two degrees, and adapting to a new country). Her kitchen skills quickly became indisputable and remain so to this day.

So, on a sunny Wednesday afternoon, three generations congregated in a cozy suburban kitchen: my aunts Andy and Maya, my mother’s cousins Noreen and Daphne, our esteemed teacher, and me. For four delightful hours, Doreen schooled us in the delicate, time-consuming, and dying art of potato chop and pan roll making. Amazed at the effort required, we gained a new appreciation for that time she showed up with 70 potato chops for my grandmother’s 70th birthday, and understood (almost) why the Costco’s frozen hors d’oeuvres figure so prominently in today’s party repertoires. Achieving the perfect round shape proved challenging for all of us, but Doreen was patient. I was pleased when she praised my carefully-formed patties, exclaiming, “See, Carolyn can make them nicely, because she’s got such big hands!” Unfortunately, our pan rolls were deemed “not very pretty” by Doreen – we had trouble achieving the right thickness for the crepes, and our rolling abilities left much to be desired. 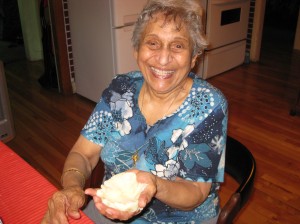 Potato chops begin life as a third of a cup of mashed potato flattened into a cupped hand. 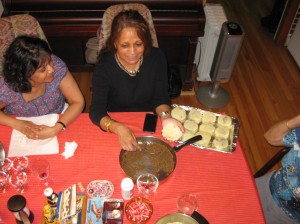 The next step: spooning in the mince, and wrapping the potato shield around it…. 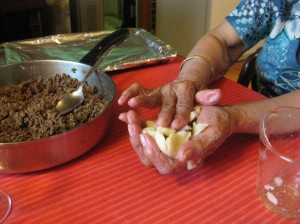 Doreen’s approach to cooking is similar to her approach to life – basically, she doesn’t worry too much about anything. She showed us how to fix tears in our potato chops by covering them up with more potato – “noone’ll notice, anyway!” – and jovially consented to use oil for frying instead of cooking spray upon my timid request. I found her resourcefulness and thrift refreshing – for instance, she was cool with the expensive potatoes we had supplied for the lesson, but confessed she usually uses “regular brown potatoes”, and she cheerfully suggested frying the leftover egg so it wouldn’t be wasted. 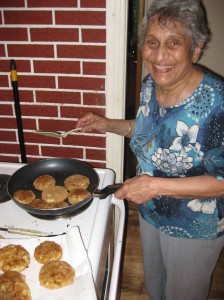 A cardinal rule in Indian snack foods: fry everything.

At the close of the lesson, as we enjoyed the fruits of our labour, we all felt pretty grateful for a chance to hang out with Doreen – who, at 89, is way more fun than many poor souls in my age group – and benefit from her extensive knowledge and wisdom. It was also truly wonderful and momentous to take part in the passing down of our community’s culinary heritage. In so many immigrant families, old customs are gradually forgotten but traditional foods live on. My kids won’t get to hear stories firsthand about what Karachi was like in the 1930s, but they will know that potato chops and pan rolls are perfect at parties and that their great-grandparents (and their friends) thought so too. 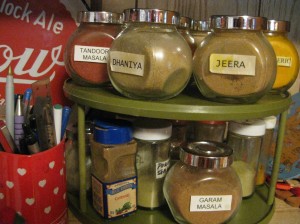 A glimpse of my cousin Daph’s arsenal – dhaniya is coriander, and jeera is cumin. 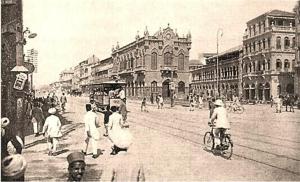 Karachi in the 30s – an image sent by my cousin Michael Pinto upon reading this post. 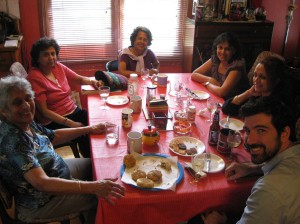 Teatime – another legacy of our British-Indian heritage. 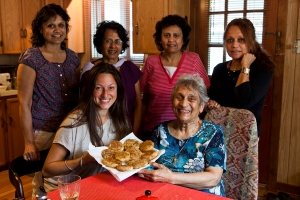