We Might Be Crazy. (An Impromptu Road Trip South from Montreal)

In front of our place in Montreal, before hitting the road. No shortage of snow.

I had some vacation time to use up. Last week over cozy drinks in Quebec, we hatched a plot to drive as far south as we could. Our friend, Jo Notkin of Zoe Ford Catering, mentioned she was making desserts for a New Year’s Eve party in southern Alabama, so we figured we’d try to make it there in two days, and possibly to New Orleans after that. Time would be limited but it would still be fun to get a glimpse of the south. We set out a few days after Christmas (allowing just enough time at home to recover from nonstop festivities, hang out with visiting family and friends, and experience a record snowfall (45 centimetres in 24 hours). The long stretches of driving lend themselves to dashing off a blog post or two about our adventures – so here goes.

We began our trip with whirlwind visits to two towns we’ve often been in before. Riccardo’s sister Barbara and her family live near Albany, New York, and we joined them and their parents and brother for a belated Christmas lunch of cotechino, krauti (that’s Northern Italian sauerkraut), ribs and the most unbelievable Amarone I’ve ever tasted (carefully spirited back from Italy by Riccardo’s father). It snowed steadily throughout our drive through the Adirondacks, creating perfect conditions for the boys to spend an afternoon playing street hockey and making a fort. (The girls stayed inside and chatted about wedding stuff.) After a hot chocolate and Bailey’s (not too much for Riccardo, he’s driving!) we headed back out into the snow for our next destination. 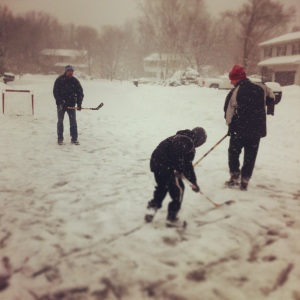 In the evening, we braved the blizzard (and the irritation of being stuck behind overly cautious drivers with no trust in their snow tires) and headed south to Bevan and Eliza’s place in Norfolk, Connecticut, passing through the “dreamlike Berkshires” immortalized in James Taylor’s song and through numerous snow-globe-esque Massachusetts towns.

The Red Lion Inn in Stockbridge, Massachusetts – we stop here sometimes en route home from Norfolk as the lobby is awesome.

A package store in charming Great Barrington, Massachusetts – that’s what they call the liquor store in this part of the world (something about a post-Prohibition compromise by the Temperance movement that liquor could only be sold in a concealed container).

A party for Eliza’s thirty-first birthday was in full swing when we arrived, and it was a far cry from last year’s piña coladas and bonfire on the beach in India. A fire was roaring, party guests young and old were clad all in white per the birthday’s girl’s request (some in vintage wedding gowns), a sumptuous feast of pulled pork had been laid out, Tarantino films and Betty Boop cartoons were projected onto a wall, and lively games of carpet bocce and croquet were cheered on by enthusiastic spectators. The music drifted somewhere between old-time country and dancehall reggae. News of our road trip plans spread quickly and we were met with reactions ranging from admiration to mild bemusement to speechlessly raised eyebrows. “The folly of youth!”, one party-goer exclaimed, and we were slightly flattered.

A snapshot from the end of the night – living room croquet and white wedding dresses in celebration of Eliza’s birthday.

An evil glare from Antonio Banderas behind a game of living room bocce.

Whenever we visit Norfolk, I’m struck by the connection people have to their heritage. In many houses we’ve been to, people lovingly use their great-great-grandparents’ bone china on a Tuesday night. Stunning two-hundred-year-old pine furniture is casually strewn about (I have never seen any item from Ikea anywhere in this region.) To me, this seems in stark contrast with Montreal where so many of us are the children of immigrants who came to Canada with nothing, and the oldest heirlooms we have are our parents’ LPs from the 1970s.

It was wonderful to catch up with a cast of our favourite Norfolk characters, most of whom were just in town for the holidays. We’ve met many of them before and always appreciate their generosity of spirit towards a couple of Canadian urbanites. At the stroke of midnight, a spontaneous group hug broke out and wrapped itself around Eliza, exuberantly singing “Happy Birthday” in every different possible key.

In the morning, after a sound sleep in a beautiful room, Bevan packed us the best pulled pork sandwiches ever and we set out, hoping to make it as far south as Asheville, North Carolina, by evening. I’m writing this from where we actually ended up – Knoxville, Tennessee, since we realized last night it’s closer to where we’re going in Alabama. More soon…

Bevan wishing us bon voyage in the morning. 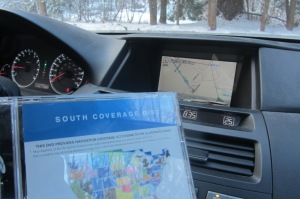 Departure time delayed a further few minutes upon realization that our GPS doesn’t actually go to North Carolina. Crisis averted, though – we found the “Southern US” disc in the glove box.

2 thoughts on “We Might Be Crazy. (An Impromptu Road Trip South from Montreal)”