By Montreal and Beyond January 4, 2013 24 Hours in New Orleans Louisiana New Orleans 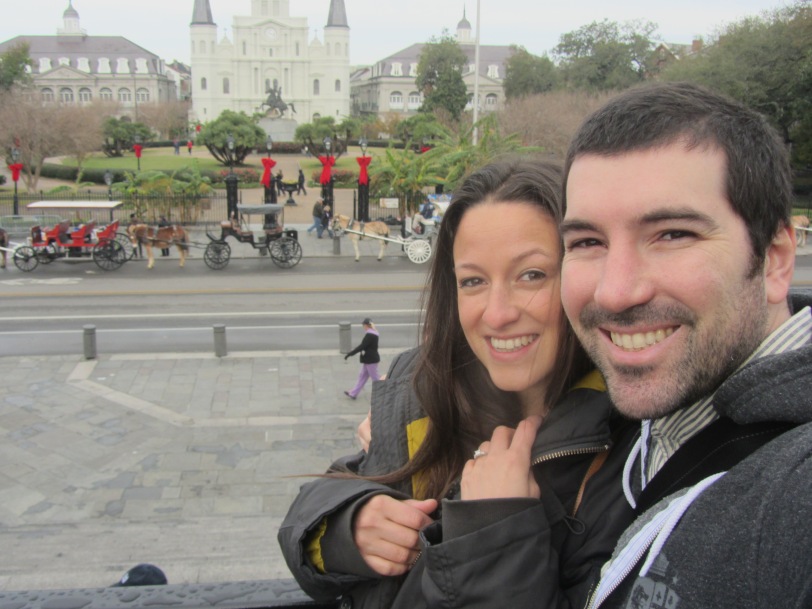 In our last few precious hours in New Orleans, we found ourselves with several missions to complete. On the agenda:

Item 1 was best accomplished at the Louisiana State Museum, where we unabashedly indulged our history geekdom. 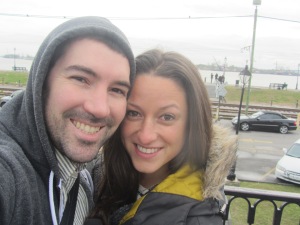 Ready for some history-learnin’, in front of the Mighty Mississippi. 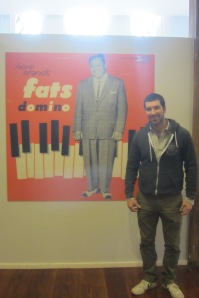 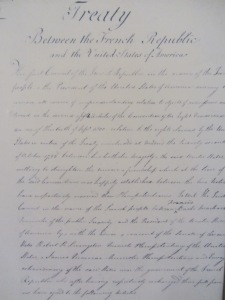 Even in 1803, 50 million francs for Louisiana was a pretty sweet deal. 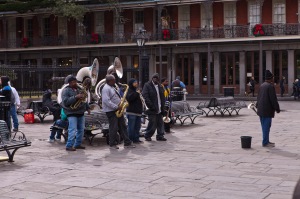 These guys provided the soundtrack to our museum visit.

Item 2 was neatly checked off at an exceedingly popular spot called Acme Oyster House. Sadly, I fell a few oysters short of having my name inscribed on the Wall of Fame, reserved for those exceptional diners who have put away 15 dozen or more. (The so-called “house leader” ate 42 dozen oysters in one sitting.) Established in 1910 and located in the middle of the French Quarter, Acme Oyster House attracts long lines – usually a terrible sign – but I’d been here twice during a business trip a couple of years ago and remembered it being awesome despite its tourist-favourite status. I was thrilled to find it was pretty much the same. We sat at the bar with bloody Marys and chatted with the shuckers (one of whom let me keep one of my larger shells – I’ll use it as a soap dish). Over 15,000 oysters are shucked here in a week, causing the shuckers to have seemingly bionic forearms. 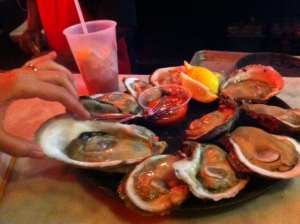 The one I’m about to grab is my future soap dish.

Riccardo, typically unenthusiastic about oysters, discovered he loves them when they are baked with obscene quantities garlic, butter and cheese. Shocking.

We took care of Item 3 at Rouses, an awesome grocery store on the edge of town. We picked up four bottles, deciding we could claim we thought it was just juice if questioned bringing too much alcohol back into Canada. Calculated risk. We also took advantage of the opportunity to stock up on hot sauce, remoulade and snacks for the car.

Our last order of business, Item 4,  was to pick up Brynley’s shirt from a bar called Sazerac in the schmancy Roosevelt Hotel. It seems the Sazerac cocktail was invented in New Orleans and the Roosevelt has capitalized on this fact with highly enthusiastic and self-serving marketing. Riccardo sampled one (actually two, since they brought me one by accident) in the elegant and atmospheric lounge but I wasn’t keen on the intense flavours of rye, bitters and herbsaint. 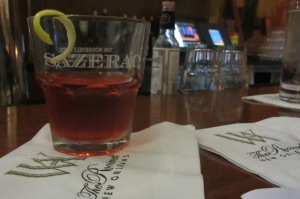 An intriguing combination, but I’ll stick to vodka. 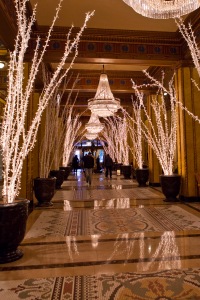 Not pictured: bellhops in top hats.

Then, it was time to hit the road… with me behind the wheel, for the first time on this trip!

However, we couldn’t leave Louisiana without one last gumbo. After the slightly nerve-wracking crossing of the 23-mile-long Lake Pontchartrain Causeway, we stopped in the adorable town of Hammond at a similarly adorable family restaurant in a strip mall. The impossibly sweet waitress was convinced she knew me from somewhere, and then gobsmacked when I told her why that was unlikely (“Whaat? Y’all are from Cay-nadaa?”) 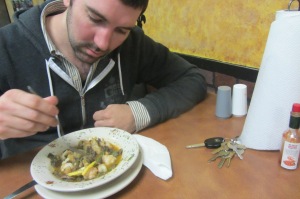 The best (and only) shrimp la-la we’ve ever had – fresh, swimming in garlic and butter, and budget-friendly.

It’s been a blast conducting our drive-by explorations of New Orleans. Next stop is Memphis, Tennessee. Maybe it will be warmer there! 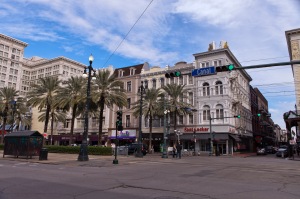 Parting shot 1: Don’t let the palm trees fool you – it really was the coldest day of the entire year. (Photo by Riccardo) 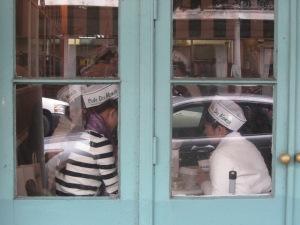 Parting shot 2: Workers at the famous Cafe du Monde, beloved by tourists for its sugar-laden beignets and chicory coffee. 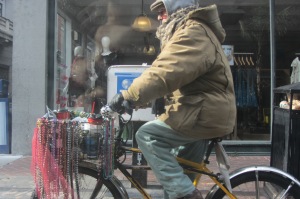 Parting shot 3: New Orleans has no shortage of weirdos – here’s one zooming around town on his bead-festooned bicycle.