Walking (and Eating) in Memphis 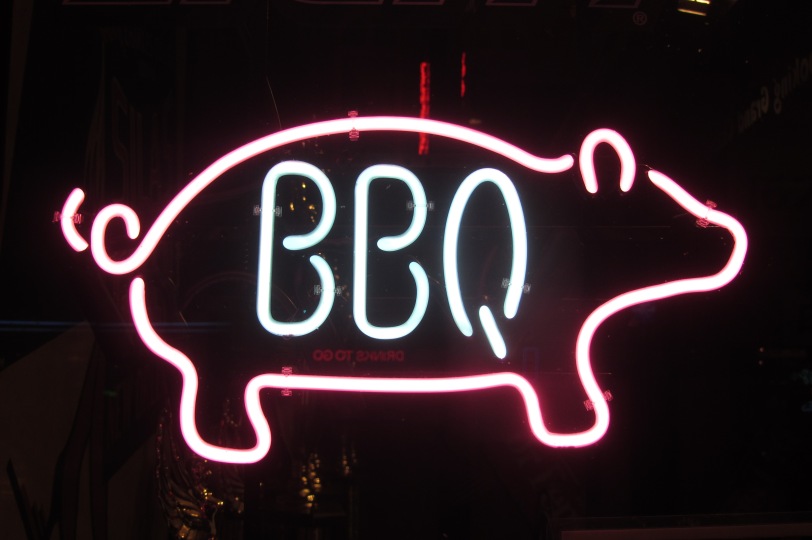 I’m writing this at five past stupid o’clock (aka 6am) in Memphis, as we prepare to depart for our next harbor: the tiny town of Calhoun, Tennessee, to visit one of my company’s paper mills.

It’s bittersweet to leave Memphis – we love it here.

We got here in the wee hours of yesterday, after a five-hour drive from New Orleans that was interrupted by several mini-missions: 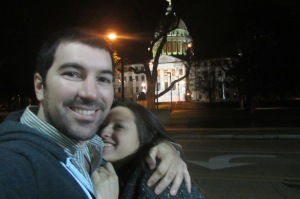 Acting the fool in Jackson, Mississippi. 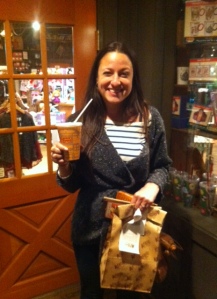 Although, thanks to the above-described dilly-dallying, it was almost 1am when we approached the Memphis city limits, our first move was to make a beeline for Graceland for a first glimpse at the most magical place on earth. 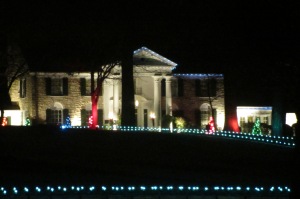 The bellman was thoroughly impressed when he saw our license plate. “Y’all from Kew-beck?” he asked, wide-eyed. “It’s possible to DRIVE from Kew-beck?”

We awoke in the morning with a fully charged itinerary. We had breakfast at the amazing Arcade Restaurant, the oldest restaurant in Memphis (established 1919). Since arriving in the South, we’ve learned that it’s not always necessary to order two meals – the portions are so massive that one generally suffices. At Arcade, the chef clearly didn’t trust our judgment and split our one order of eggs, country ham, sausages, biscuits and gravy into two more or less gigantic portions. That meal kept us going the whole day. 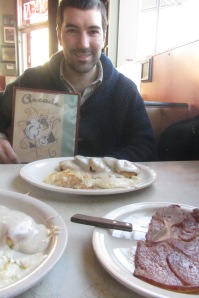 We knew it was going to be a good day in Memphis when we stumbled across this place. Elvis ate here. (Photo by Riccardo Cellere) 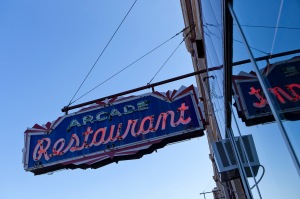 There were three historically significant places we wanted to see, beginning with the National Civil Rights Museum which is housed in the Lorraine Motel, where Dr. Martin Luther King Jr. was shot outside room 306 in 1968. So many years later, people came from far and wide to pay their respects. It was a surreal, sobering experience, and even Riccardo was affected by the dust, or allergies, or something. 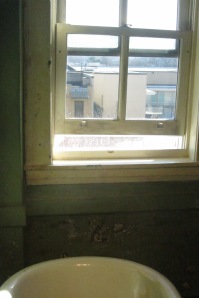 The very same bathroom from where the fatal shot was fired. The balcony Dr. King was standing on can be seen across the parking lot. 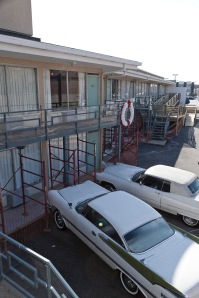 The ill-fated balcony outside Room 306.

We took a tour of Sun Studios, where Saint Elvis, Jerry Lee Lewis, Johnny Cash, Ike Turner, Roy Orbison and many, many others recorded their first hits. Standing on the very spot where Elvis recorded “That’s Alright Mama” (his groundbreaking tune) in 1954 was very, very exciting. 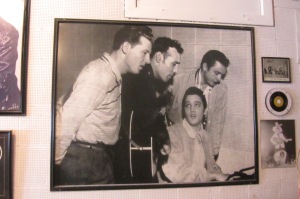 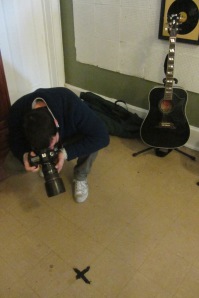 Riccardo photographs the spot Elvis stood on during recording.

Of course, the ultimate goal of most Memphis visits is a pilgrimage to the house where Elvis lived for most of his life (along with his parents and grandmother). It was mid-afternoon when we bounced into Graceland, not even flinching at the exorbitant entrance fee. How incredible to walk through the same door Elvis used and to lay eyes on his tastefully decorated (and relatively modest) personal space. We strolled awe-struck through the Jungle Room, the gold-record room, and his parents’ bedroom, and paused respectfully at his final resting place. We picked up a t-shirt for our friend Myles at one of the no fewer than 11 gift shops before heading back out onto Elvis Presley Boulevard towards town. 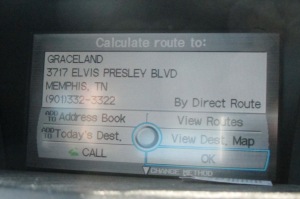 The coolest address our GPS has ever seen. 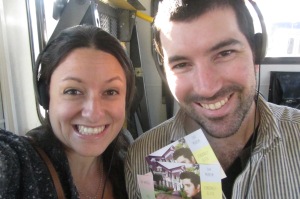 On the shuttle, tickets in hand and headphones in place! 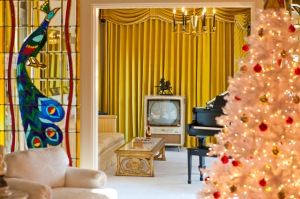 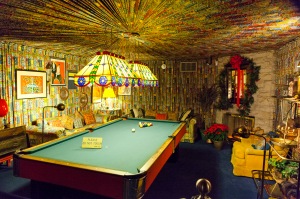 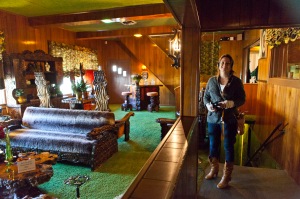 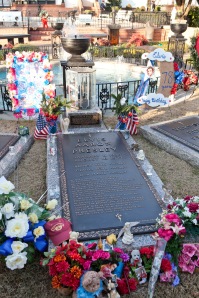 Between all this educational activities, we managed to meander on Main Street, hear some blues on Beale Street, and peek at the guitar assembly line through the windows of the Gibson factory. 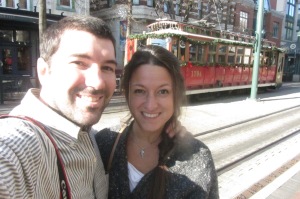 Here comes the trolley to the neighbourhood of make-believe! 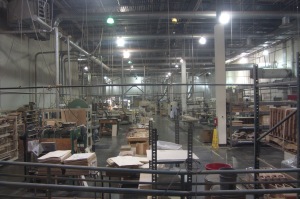 Where guitars are born.

We ventured into a cool-looking spot called Gus’s for fried chicken, and later learned it’s widely considered to be the home of the best fried chicken in Memphis. Gus’s was certainly packed, even at 5pm, with Memphians from all walks of life. We were seated at a table for four, but the group of six people next to us were squeezed uncomfortably at a table of the same size. Naturally, we invited them to use the side of the table we weren’t using, and they thanked us by buying our next two rounds of beers. What ensued can only be described as a cultural exchange – they quizzed us relentlessly on all things Canada, and were absolutely astonished to hear about our ridiculously high taxes and cost of living. (One fellow who lives in Memphis told us he earns $75,000 a year, paid about $100,000 for his house, owns four cars, and paid $4,500 in income tax last year – federal only, since Tennessee does not have income tax). He asked incredulously how we could afford to live in Canada. All we could do was stare glumly down at our chicken, fried pickles and ranch dressing, and resist the urge to sob uncontrollably. 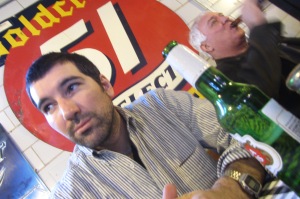 At Gus’s, with one of our new friends drinking a beer in the background. 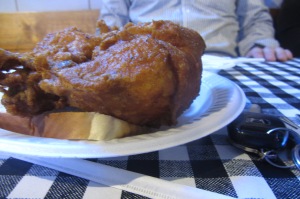 I can safely say there is no fried chicken in Montreal that approaches this level of greatness.

A pair of wide-bottomed ladies at the other table beside us giggled as I used a knife and fork to cut my food (yes, yes, I know – sacrilege. I’m a germophobe. Whatever.) They insisted we try sweet tea – “it’s a southern thing,” they said – but it didn’t really appeal to either of us.

We didn’t have a full meal at Gus’s for the express purpose of leaving room for ribs later. We found them at Corky’s, a famous and longstanding BBQ joint on the outskirts of town highly recommended by our friend Joanna. Like every other business in Memphis, its walls are festooned with memorabilia and there is a neon sign outside – the perfect setting in which to sample dry ribs, BBQ sausages and macaroni and cheese.  The night ended with more blues on Beale and a terrible cocktail at a country bar. There are other, cooler blues bars, but they’re farther away and we couldn’t drive out to where they were (blame exhaustion and beer). Next time. 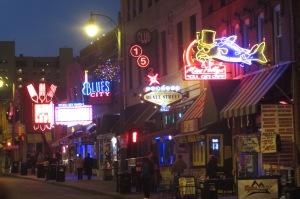 We had no idea what to expect in Memphis, and couldn’t have been more pleasantly surprised to discover a pretty, friendly town with a deeply-engrained but subtle respect for its glorious history, musical and otherwise. People speak slowly but colourfully – I could barely understand them, but could have listened all day to a couple of shopgirls gossipping. Common courtesies are the norm in Memphis (and probably in much of the South) – even our hotel presented us with warm cookies when we checked in. We’ll definitely come back and spend more time here in the land of the delta blues, if only for the fried chicken at Gus’s. 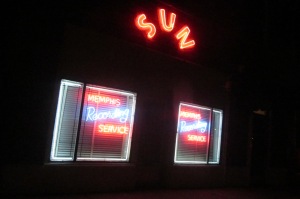 Sun Studios is still used for recording at night. 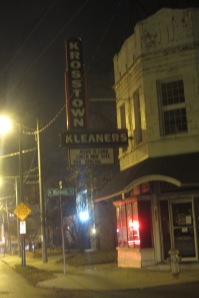 The sign below “Krosstown Kleaners” says “JESUS IS LORD, CHECK WEB SITE FOR SPECIAL”. Too amazing.

Bonus musical selection: Elvis at his finest in 1968, singing the song that made him famous 14 years earlier.

2 thoughts on “Walking (and Eating) in Memphis”