A Few Blissful Hours in the Medieval Walled City of Siena

Just about as soon as we arrived, it was time to leave our beloved Rome and head north, towards our eventual destination: the Veneto region, where Riccardo’s parents are from. Our itinerary included a detour to Cinque Terre, on the west coast, and perhaps a quick peek at the Leaning Tower of Pisa, which we missed on our last trip.

We’d planned to leave Rome early in the morning, but were delayed by endless distractions: cappuccino, shopping, and a Seinfeldian scene involving a botched rental car reservation. We decided to stick around for one last lunch with Ty and a quick visit to his office at the Canadian embassy (photos not allowed).

While sipping a cappuccino ‘al banco’, I witnessed an endearingly Roman scene involving a little old lady sitting on a bench. The bench faced away from the bright morning sun but she kept twisting around, seeming like she might like to sit facing towards it. Out of the blue, three passers-by who happened to be approaching from three different directions at the same time noticed the lady’s distress. So began an excitable deliberation, the details of which I failed to grasp, but which resulted in all three strangers picking up the bench and turning the whole thing around. They then quickly dispersed, smiling engagingly at the old lady who was now happily nodding and sunning herself in the desired position.

I won’t talk about the stunning scenes awaiting us on the road north from Rome, because that would be even more mind-numbingly boring than this blog already is. I’ll simply mention that at some point on the four-hour drive towards Cinque Terre, we didn’t feel like being in the car anymore, and decided to stop and spend the night in the nearest town: Siena. I’ll also mention that a brief visit to a random snack bar in the middle of nowhere yielded the best-tasting sandwich ever made with only two ingredients – bread and porchetta – no condiments whatsoever.

It was after dark when we reached Siena and I was skeptical – the streets looked narrow and somber, parking seemed impossible, and it was raining. Riccardo assured me I’d like the town – we luckily found a great place to stay, settled in, and set off in search of dinner. I quickly realized that Siena is one of the coolest places on earth. It’s a medieval walled city that hasn’t changed much at all in the last 800 years or so, but people clearly still live there and the dichotomy of ancient versus modern is refreshing and charming.

Unfortunately, we picked this most magical of settings to have a huge argument – pretty rare for us. We glared at each other over a fabulous dinner and beautiful wine, until eventually, the knot unraveled and we forgot what we had been fighting about. It was impossible to stay mad while savouring fresh ravioli stuffed with pumpkin, sage and walnuts. By the time the digestivi arrived, we were all smiles again and headed out to explore the empty, winding streets.

At every turn, we came across a new, fascinating discovery. One such turn brought us unexpectedly face to face with the imposing Duomo (cathedral), eerily lit up against the black sky. We were standing there marvelling at twelvth-century ingenuity when two young guys suddenly appeared before us, beckoning us to come with them to see “una secreta”. The thought that they were setting us up to be jumped by some gang briefly crossed our minds, but we didn’t have anything valuable with us and besides, our spidey senses told us they were harmless. We followed them to the back of the Duomo where they pointed out this anagram inscribed in its wall.

Calling all word nerds: This Latin palindrome dating from Roman times can be read top-to-bottom, bottom-to-top, left-to-right, and right-to-left.

Gabriele was Sienese, and his friend was visiting him from Sicilia. He was an enthusiastic, if mysterious, tour guide and when he saw how excited I was about the anagram he grinned and took us to another side of the Duomo, where an ancient well had been covered up for centuries and recently restored. We walked on with them for a little while, answering their questions about Canada and asking them about Siena, before we parted ways and went off in search of a nightcap.

Our new friends suggested we try a restaurant nearby, but when we got there, they were just closing up. The friendly owner pointed us in the direction of the Piazza del Campo and said we’d surely be able to get a bottle of wine there. A few twists and turns later, we found ourselves in a magnificent sloped piazza surrounded by medieval buildings and facing an impressive hall and clock tower. Small groups dotted the piazza – couples young and old, and teenagers drinking and carrying on in a very orderly and stylish manner. We scored another bottle of chianti at another restaurant that was also closing up, and picked a spot in the centre of the piazza. (This was a far cry from Mexico, where attempting to purchase alcohol after hours automatically resulted in extortion. This restaurant charged us the same reasonable price we’d have paid if they were open and we were having dinner.) Presently, the previously independent groups of kids began to mingle and merge, and some started singing and dancing to what sounded like Italian folk songs. After a good couple of hours in the piazza, we strolled back to our home away from home.

Like Montreal’s Tam-Tams, but way cooler and far more civilized. 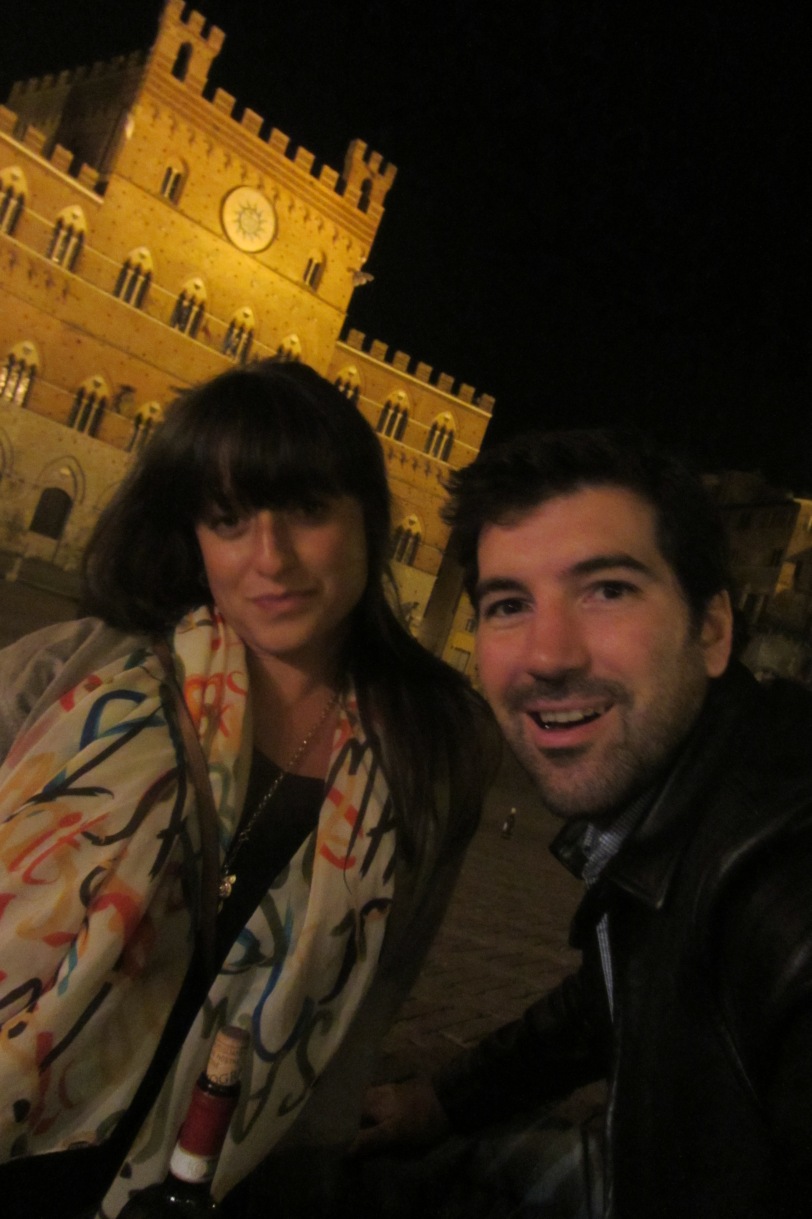 Waking up in Siena was delicious – it had rained in the few hours we’d been asleep, and we threw open the heavy wooden shutters to hear the bells of the Duomo being answered by the bells of the clock tower. We sorted out our errands (checking out, packing up the car and booking a hotel in Cinque Terre) before exploring the streets by daylight this time, and lucking out with another truly delectable meal (ribollita, Tuscan sausage and pasta with duck sauce). There was no queue to see the inside of the Duomo, so we made a last-minute decision to duck in and admire some priceless art before taking off.

Oh, that sculpture is by Michelangelo? Cool, no big deal…

We could have spent months in Siena but Cinque Terre awaited. The now-familiar sound of churchbells could be heard behind us as we drove beyond the walls of the city. Would we have time for a quick stop in Pisa to see the curious leaning tower? Tune in next time and find out…

In the meantime, a few snaps:

Eerie streets of Siena by night.

A metaphor for marriage? 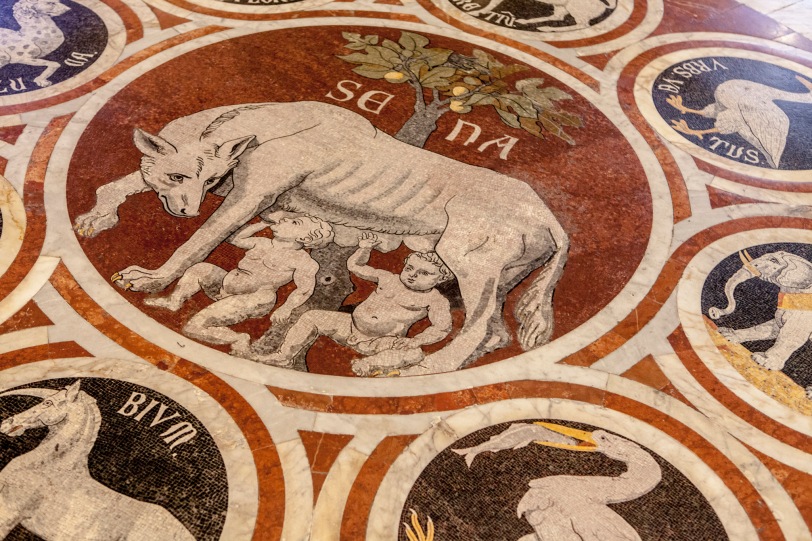 Is your town’s emblem this badass? (Photo is of an inlaid marble floor in Siena’s Duomo)

That’s the Duomo. It’s late and I have nothing else to say about it.