My Bizarre Secret Longing to See the Leaning Tower of Pisa

By Montreal and Beyond October 26, 2013 Leaning Tower of Pisa

I have always wanted to see the Leaning Tower of Pisa. I have a photo of my grandmother standing proudly in front of it in 1950, and I guess a visit to the universally-known landmark represents the adventurous spirit of the golden age of travel to me. I also felt sort of sorry for it: if it hadn’t met with the misfortune of being built on such unsteady ground back in the twelfth century, it would just be an ordinary tower – still beautiful, but ordinary – instead of the laughing stock of the tourism circuit.

When we drove from Napoli to Vicenza and then back to Rome in 2010, we didn’t have time to stop in Pisa despite the secret wish I harboured. This time, it seemed more feasible but not exactly convenient. Riccardo, ever indulgent, happily agreed to exit the Autostrada en route to Cinque Terre, even though we had already delayed our visit there by a day and left Siena later than planned. It seemed I would finally get to see this legendary tower, and before sunset too!

But “because Italy” (an expression coined by my cousin Ty), the Autostrada led us on a wild goose chase and we ended up several towns past Pisa. I was disappointed but obligingly agreed that turning back didn’t make sense. Instead, I noticed a sign for “Torre del Lago” (Tower of the Lake) and suggested we do a drive-by. I’d settle for another tower at this point, even if it was perfectly upright. We veered off and followed the signs.

It soon became clear that even though the town was named for a tower, there was none to be found. All we found was the lago and a couple of nondescript espresso bars. However, our explorations had led us back down the old road from Torre del Lago to Pisa. The sun was disappearing quickly, but if we hustled we might still make it there and see the damned tower after all.

Hopeful signs, but still no tower.

We didn’t have a GPS (a tool we shamelessly rely on at home) and our only map was one we’d downloaded to an iPhone and which always seemed to update a few seconds too late. A couple of wrong turns ensued and I once and for all abandoned hope of seeing the tower, at least before sunset. It still seemed pretty far away.

But sure enough, Riccardo found his way and we started seeing tiny signs pointing the way to the “torre pendente”. Before long it came into view, over the treetops! I was so excited. We quickly ditched the car on a side street, only briefly pausing to wonder whether the sketchy-looking “Prada” bag sellers who were packing up for the day would bust into it, and then literally sprinted toward our destination. Here’s my first real glimpse:

The tower is part of a complex that includes a stunning Duomo (cathedral) and a few other buildings, and the whole thing is rather beautiful. The town of Pisa had helpfully erected a signboard providing the history and architectural details of the complex, with no mention whatsoever of the conspicuous defect of one of its key components. Who were they kidding? The vast majority of tourists, sadly including us, just wanted to have a laugh at the world’s most famous engineering fail.

And so we did. It was dusk, but we managed to spend a few minutes admiring it before the lights were turned off. (Note: Thanks to modern technology, the tower has been fortified, and it’s actually possible to go to the top. But of course, we were too late for that.) Here she is.

We never really travel to a place with a checklist of attractions to visit, not that there’s anything wrong with that. It’s just that our travelling style is more focused on eating, drinking, learning a thing or two about the place’s history, and hearing funny accents. Usually we come across the major sights of a place quite by accident. But once in a while, it’s fun to throw habit out the window and indulge in some good, old-fashioned sight-seeing. This was one of those times and I’m happy I got to check the Leaning Tower of Pisa off my list.

With a final espresso on the outskirts of town, we regained our course towards Cinque Terre. 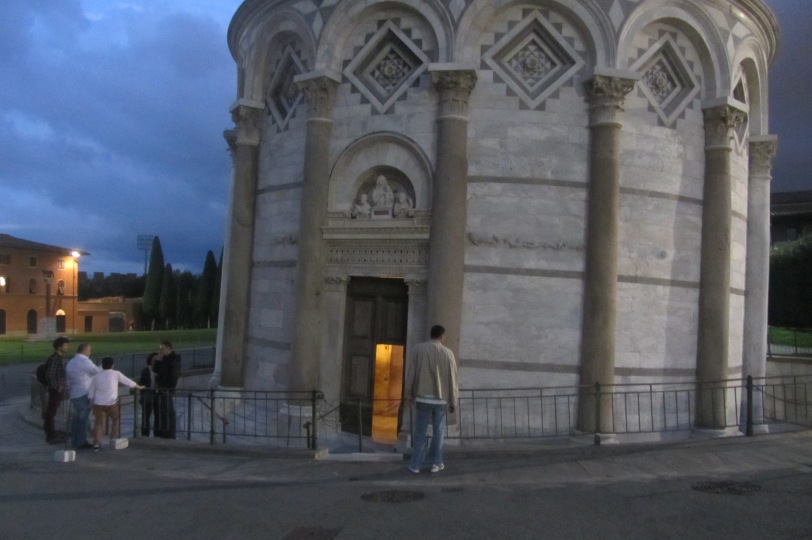 Here’s the base of the tower – no fanfare or pretense, just a simple gate and a couple of guys hanging out. 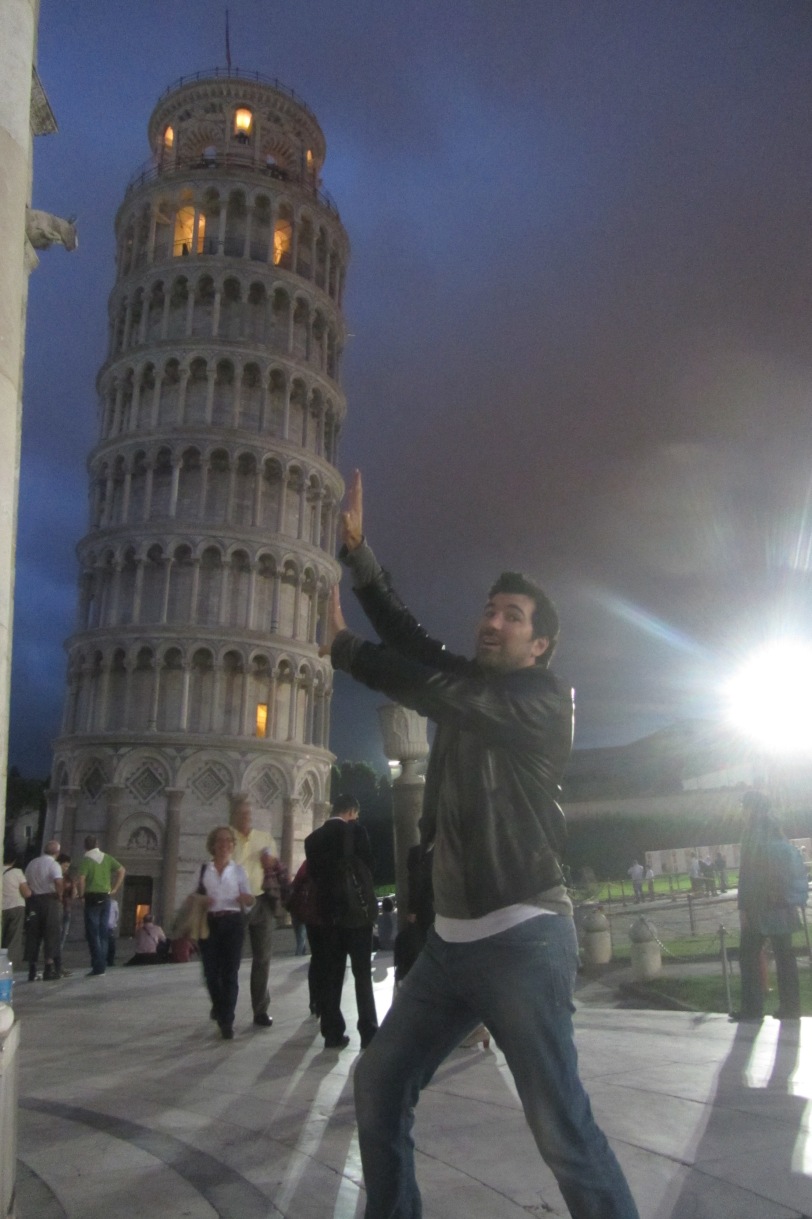