After being dazzled by the Cliffs of Moher the previous evening, we’d gone onward to Galway where we stayed at the best B&B of all time – Atlantic Heights B&B in Salthill – little plug there, couldn’t resist. It was so comfortable that we took our time getting out to explore the city, but didn’t care because we are on VACATION. And on this eighth day of said vacation, we experienced our first-ever raindrop. It rained throughout the day but never enough to be a real pain.

Here are some highlights from Galway:

We found the Pie Maker. This is an exceedingly adorable little spot all done in wood, making savoury pies in thick crusts. The Swiss girl working there was very curious about Canada and asked us to write down the names of some Canadian music she should get into – I was tempted to write Gordon Lightfoot, but instead wrote Tegan and Sara because it seemed on par with what she was already listening to.

We managed to see some historical sights. Having read up on Galway history in the car the previous night, we actually knew what we were looking at.

We observed some wildlife by the harbour. Swans, mallards, and a trio of beer-guzzling miscreants.

We squeezed in some culture at the Galway City Museum. It started raining and we ducked inside – admission was free but I tricked Riccardo and told him it was 12 Euro each. I love punking him!

We had a kickass lunch. Anyone visiting Galway should check out Ard Bia, right behind the museum. Cozy space, fresh local ingredients, yada yadaWe learned about the Irish language. The delightful owner of Cupan Tae – “an original Irish tea shop” – informed us that many people in this area are fluent Irish speakers.

We saw people of varying ethnic origins. For virtually the first time in Ireland, we observed signs of ethnic diversity. (Keep in mind we haven’t spent very much time in cities at all, and though there is an Indian curry take-away in the tiniest of towns, we’d not actually seen the folks running one.)

Galway is amazing and I’d love to spend more time there someday. But the vibe of this trip is more ‘rest and relaxation’ – by the afternoon we were yearning to be back in the countryside. Luckily, I had booked yet another AirBNB in the town of Letterfrack, Connemara. The drive was spectacular, of course, taking us past impossibly green fields stretching over rolling hills peppered with livestock and the occasional farmhouse. It’s too incredible to explain so I won’t.

We couldn’t have picked a more perfect spot to relax for the night: our host was super cool, and the house was gorgeous. He graciously invited us to join him in a glass of wine that flowed on through the evening. (I settled for water once again.) We showed him photos from our motorcycle adventure in Laos, and he explained the subtle differences between Irish and English people. When we got to chatting about Buena Vista Social Club, he put on the CD. A young Italian couple from Firenze arrived at the same time as us, and we stayed up shooting the shit with them. They seemed relieved to be able to have a conversation (they spoke almost no English) and Riccardo was happy to finally have someone to commiserate with on the questionable quality of espresso in Ireland. And for 2 Euros! In Italy an espresso costs one Euro… “e fatto bene”, they agreed.

It rained all night and we fell asleep watching the drops hit the skylight above our bed. By morning the rain had subsided, leaving behind, incredibly, an even greener landscape. The air was still chilly so we opted for a day of driving, taking the Sky Road around the peninsula and through Connemara National Park, and stopping in the charming town of Clifden. A friendly woman at a cheese shop gave us a crash course on Irish farmhouse cheeses – we stocked up on a few with a baguette. We told her we’d been to the Milleen’s farm down in the Beara Peninsula – the Irish cheese community being relatively tight-knit, she knew them personally and asked after them.

To supplement the day’s picnic, we took an impromptu detour to find a wonderful place by the sea where they smoke salmon, tuna and mackerel. By the way, the salmon in Ireland is the best I’ve ever tasted. I’d never seen the process of smoking fish, nor realized that those little sealed packets you get at the store are all prepared by hand, at least here… we came away with a newfound appreciation for this time-honoured art, as well as a slightly larger quantity of smoked fish than we could possibly consume in a day. But we certainly tried, stopping to feast in the car beside a random picturesque lough (lake) during a brief rainshower.

On our way out of Connemara we embarked on a mission to find the legendary Connemara Giant. I’d read that if you touched the hand of this slightly comical statue, he’d impart the wisdom of his tribes with you. But once we tracked him down, we forgot all about the hand-touching thing and just admired him from the car – so much for wisdom.

Impromptu stops are the best, but have a way of eating up time – before we knew it, we realized the afternoon had flown by and we could very well be late for our next destination: the famed seaweed baths in Rosses Point two hours later. We hit the road and in typical fashion, made our appointment in the nick of time.

Rosses Point is a lovely seafaring town in County Sligo – it’s Yeats country, and the subject of many of his works. Our new friend whom we’d stayed with back in Cobh hails from there, and she had told us we absolutely must go to the seaweed baths. Incidentally, her parents also run a B&B, and she hooked us up to stay there – helpful, since they don’t have a website or any online presence whatsoevere – “welome to rural Ireland!”, as she told us. They very kindly offered us a family rate, which was so good of them! Both Riccardo and I were skeptical about bathing in seaweed and had no idea what to expect. We stepped in from the dreary day to find a small woodsy chamber equipped with a sauna and two elegant old bathtubs filled with warm seawater and seaweed sustainably harvested that morning. Definitely the most couple-y thing we’ve ever done, and actually a very relaxing experience. We emerged an hour later with glowing skin and in a state of such trancelike relaxation that we got slightly lost getting back to our B&B – but couldn’t be bothered in the least. 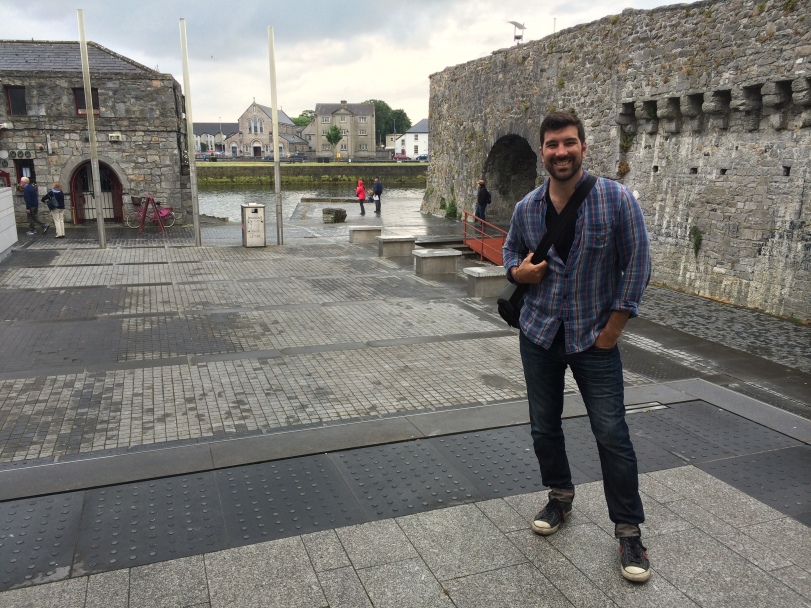 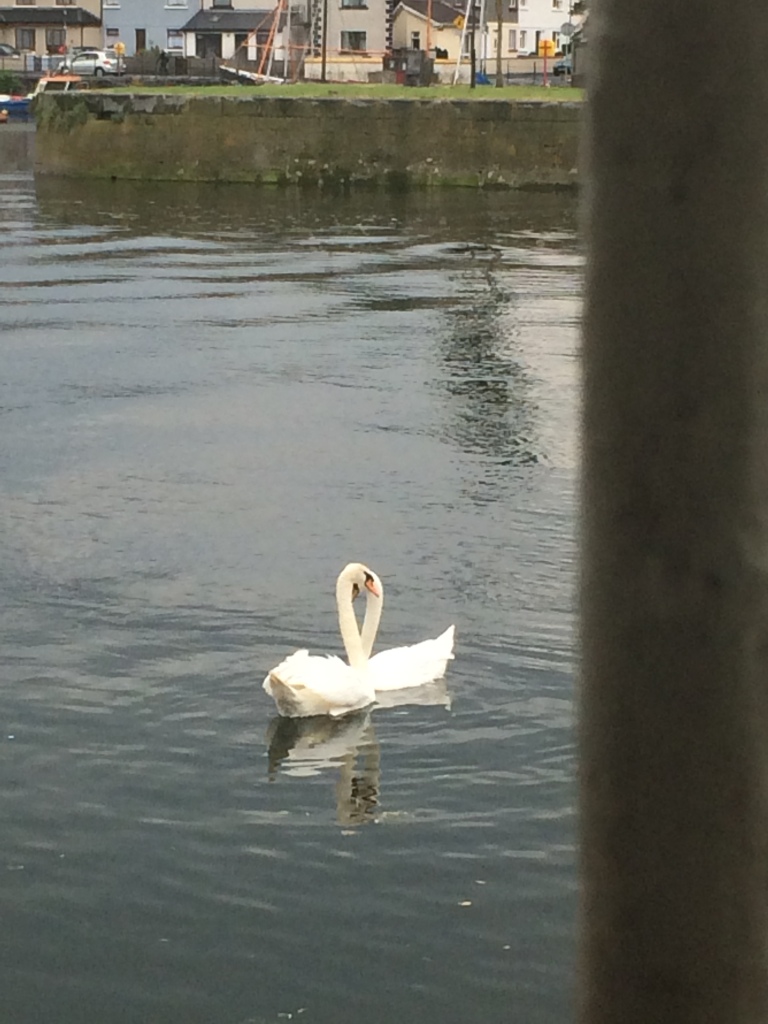 I swear these swans were forming a heart shape with their necks just before I snapped this.

Ard Bia – highly recommended for a meal in Galway

Wildlife in the harbour. 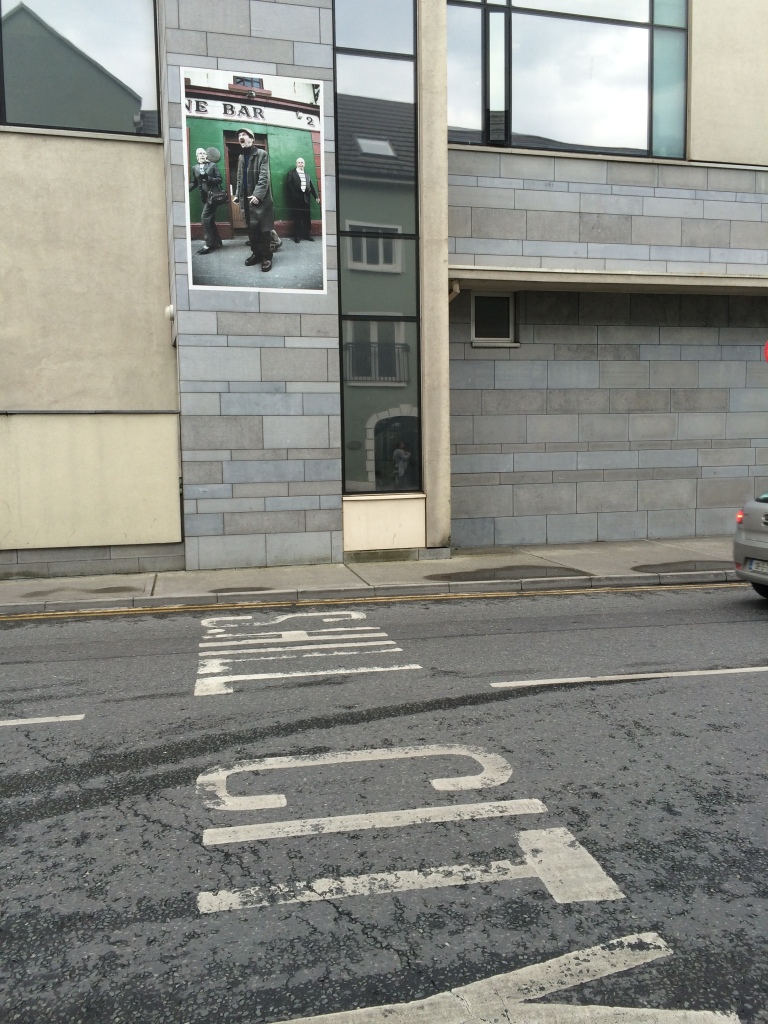 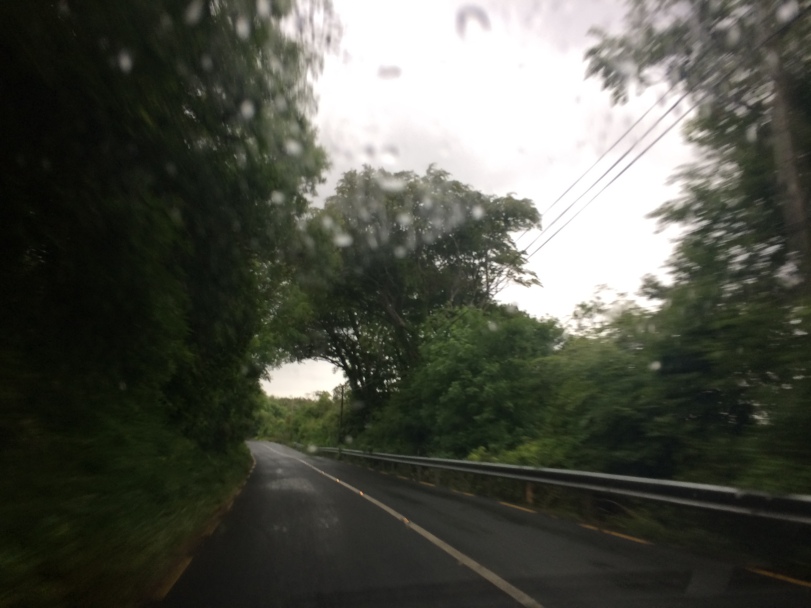 Riccardo at the Moran’s Medical Hall